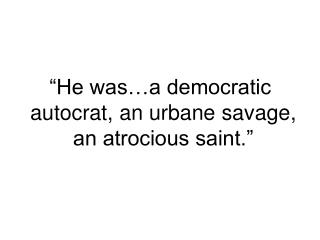 “He was…a democratic autocrat, an urbane savage, an atrocious saint.” “He was…a democratic autocrat, an urbane savage, an atrocious saint.”. Andrew Jackson: The Good, the Bad, the Evil. How could democracy simultaneously expand and decrease? What role did Jackson have in both? How did the masses of Americans participate in politics?

“He was…a democratic autocrat, an urbane savage, an atrocious saint.”

Blessing of the animals - Pet owners bring their animals to be blessed on the day of saint anthony, patron saint of A Results-oriented Approach to Capacity Development for Democratic Governance - . workshop for cida ottawa,

Economics for Democratic Socialism - . drexel university spring quarter 2009. revision of outline. i told you this class

Socio-Economic Causes and Effects of Human African Trypanosomiasis in the Democratic Republic of the Congo - . jen wilson

War in The Democratic Republic of Congo - . lecture 13. the logic of war in the liberal vision. deteriorating economic