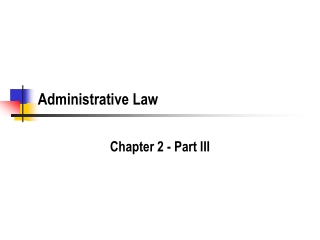 Administrative Law. Chapter 2 - Part III. Alternative to Goldberg Hearing. HUD v. Rucker, 535 U.S. 125 (2002). State brings eviction proceedings against public housing tenants who had drugs or a drug dealer in the house Tenants say they cannot be evicted for what they did not do themselves