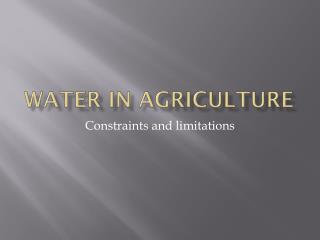 SWAR System of Water for Agricultural Rejuvenation - . why swar water, an increasingly scarce commodity is the elixir of

Safe Use of Wastewater in Agriculture UN-Water at IFAT 2012 - . water reuse in agriculture in the arab region situation,

What you should have learned in Soc 325 (if you had been paying attention) - . paul lasley jolene glenn tomoko ogawa.