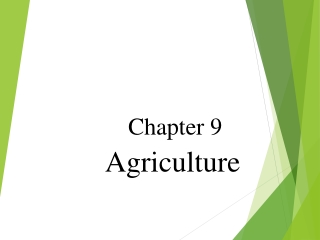 Chapter 9 . Agriculture. Key Issue #1. Where Did Agriculture Originate?. Origins of Agriculture. Agriculture = deliberate modification of Earth’s surface through the cultivation of plants and/or rearing of animals Cultivate = “to care for” Crop = any plant cultivated by people