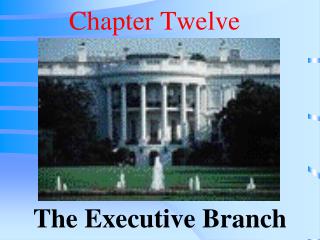 Chapter Twelve. The Executive Branch. Introduction. What do you consider the most important qualification for the office of president?. Objectives. Students WILL……… Know: The difference between a prime minister and a president. What the qualifications are for President. Chapter Twelve - . waves. waves. a wave is an oscillation that travels from one place to another. if you poke a floating

Chapter Twelve - . environments of care. environmental management. as far back as florence nightingale nurses were