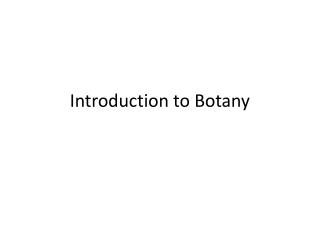 Introduction to Botany. What is Botany?. It is the science of plant life A person engaged in the study of botany is called a botanist. BOTANY - . in the bigning, a look at the organisms, and how we study plants and name them. how old is the earth. the

Botany - . how it effects our lives. what is botany?. study of plants different fields agronomy crop production

Botany - . botany is the study of plant life, including sunflowers. what is botany?. botany, also called plant science or

BOTANY - . botany questions. how did you use/benefit from plants over the last 24 hours? what are the major plant organs?

GP Botany - Botany Doctor - Medicals Auckland - At botany medical and urgent care, we know that the pressures of the

Aquatic Botany - . angiosperms. hydrophytes. plants growing in water or on a substrate that is at least periodically

Botany GaRden - . yampil pearl. welcome to our paradise of nature! it’s hidden far in the north of sumy region. you can

Pharmaceutical botany - . krok 1. pharmacy. 2018. it is known that in plants the synthesis of secondary reserve starch