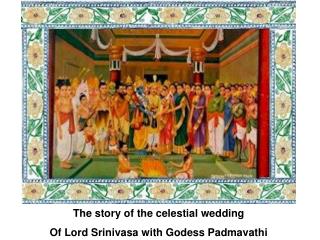 The story of the celestial wedding Of Lord Srinivasa with Godess Padmavathi. The rishis headed by Kasyapa began to perform a sacrifice on the banks of the Ganges. Sage Narada visited them and asked them why they were performing the sacrifice and who would be pleased by it. Motions of the Celestial Sphere - . constellations. sky looks like a dome with the star painted on the inside. 88

With the blessings Of Lord Venkateshwara - . venky group of industries. ever … forever. about us. introduction venky

Taweret Godess Of Demoness Of Childbirth - . her beauty shines like no

The Story of - . james j. lee. pearl harbor survivor and. a true american hero. by: trever finnigan, sabrina edmonds, and

The story of - . the fed family. judy. johnny. sally. joe. a nd max!. the situation. joe has a good job and plans to

The Story of - . there was a group of pilgrims who had just attended a cursillo weekend in spain. they were riding home

The Story of - . chinese zodiac. long, long time ago, people always forgot in which year they were born and could not

The Lord of the Rings - . the story of a civilisation presented by nicolas fley. a book. a film. two men. a man.

The Lord of The Rings - . an artifact that changed the course of culture in some way of its own. tolkien’s own cover