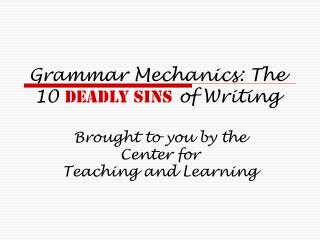 Grammar Mechanics: The 10 Deadly sins of Writing. Brought to you by the Center for Teaching and Learning. A Quick Note. Introduction to Soil Mechanics - . according to terzaghi (1948): “soil mechanics is the application of laws of

Daily Oral Language &amp; Grammar - Please come in, sit in your assigned seat, and open your binder to your