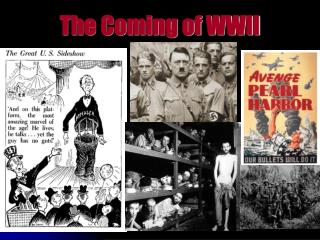 WWII is coming fast… - . the rise of dictators after wwi. the treaty of versailles wasn’t fair… the world-wide

Causes of WWII &amp; The WWII Alliances - . candidate a a well-known critic of the government, this man has

The End of WWII - . holocaust &amp; outcomes of wwii. what is genocide ?. the systematic and purposeful destruction

The Legacy of WWII - . world war to cold war. 5. aftermath of war. the appalling costs of the war began to emerge. the

The Results of WWII - . creation of the united

The Causes of WWII - . allies and axis theaters of war weimar republic treaty of versailles league of nations the great

The Results of WWII - . discovery of the

THE END OF WWII - . day 9. today’s objectives. identify events in the war in europe. describe the allied offensive in

The faces of wwii - . a biographical history of the last great war by christopher lamack. sir winston churchill. veteran

The Causes of WWII - . nazi expansion during the 1930s. hitler seduces the german people. hitler was an extremely popular

The end of WWII - . creation of offices . roosevelt created the office of scientific research development (osrd)