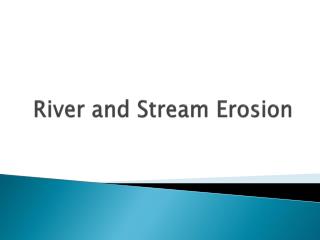 River and Stream Erosion. Complete Starter. Hydrologic Cycle. Water’s trip . Water picks up energy as it flows downhill. Water that does not soak into the ground or evaporate will runoff. Runoff eventually empties into streams, lakes or oceans. What Affects Runoff? . The Middle and Lower Course of a River - . starter: draw a simple diagram of the river cross section at the following

Soil Erosion - . grading standards in the udc. the purpose of erosion control as stated in the udc is to prevent or

Stream of Consciousness - . stream of consciousness is a literary technique which was pioneered by dorthy richardson,

Soil Erosion Issues &amp; Management - . by: nathan lenig. how to operate this activity. navigation. use this button

GRAVITY I: WATER ON HILL SLOPES.

Higher Coasts Lithosphere - . higher coastal landforms &amp; processes. in this part of the course we will be looking