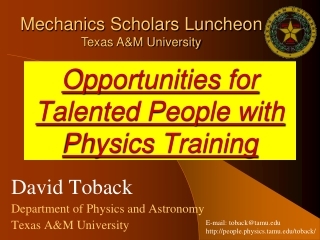 RNID Employment Training Skills Service Working with Deaf people - . who or what is rnid?. largest charity in the uk

Birmingham Mencap Voluntary and Work Opportunities for Young People with Learning Disabilities - Aims of the project. to

Training opportunities – What do I need? And where can I get it? - . vernon gayle www.longitudinal.stir.ac.uk.

Gifted and talented - . what is giftedness? what is talented? are these two terms synonymous?. terman in 1930 defined

Physics Department - . academic foundation day september 27, 2007. what can you do? what are the research opportunities?.

Identifying Able and Talented October 2013 - . providing effective classroom provision for able and talented not only