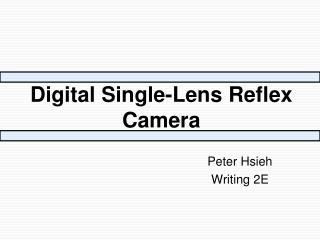 Single-Lens Reflex Camera - . image is reflected to the eyepiece by a movable

The Single-lens Reflex Camera - . a camera consists of a lens, a light-tight box, a shutter, and a sensitized plate or a

SLR Camera (Single Lens Reflex) - . to get you familiar with using an slr you should first know how the component parts

Camera Lens - . lens. the lens is the most important part of the camera lens captures light and focuses the light on the

CAMERA LENS - . why use lens?. selects and directs the light rays entering the camera . brings light from the subjects

The v570 Kodak dual lens digital camera - . lindsay mcdonald. dual lens?. the bottom one allows you to zoom in to

Single Use Camera - . functional components of the camera. capacitor and circuit board loading mechanisms outer and inner