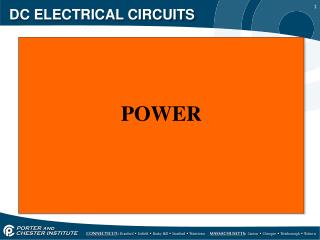 14.3 Electrical Power, AC, and DC Electricity - . a watt is a unit of power electrical power is measured in watts, rate

Chapter 28: Direct Current Circuits - . in this chapter we will explore circuits with batteries, resistors, and

ELECTRICAL CIRCUITS - . the cell. the cell stores chemical energy and transfers it to electrical energy when a circuit is

Introduction to DC circuits - . a brief overview on the basics. jbugni@nmu.edu. the atom. basic unit of matter made up

Electric Current - . electrical current is the flow of electrons. unlike static electricity, charges are in motion. two

C H A P T E R   20 Electric Circuits - . electrical devices. look around you. chances are that there is an electrical