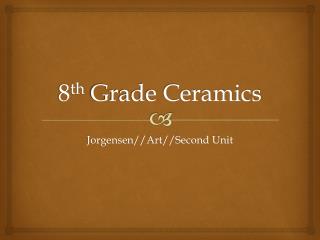 8 th Grade Ceramics. Jorgensen//Art//Second Unit. POTTERY. Origins of Pottery. Pottery is one of humankind’s first inventions T he durability of fired clay creates one of the best records of the beginnings of our world culture . Records fade the earlier we study.

Ceramic Pottery - . 7 th grade art &amp; design with mrs. jacobson. what is pottery?. pottery is one of the oldest

Intro to Pottery Primitive, Production, Present - . primitive an introduction to pottery and ceramic terms through early

2 nd grade clay chalice - . to celebrate our first communion to make a ceramic chalice that is really usable. to learn

How to be successful in Middle School, High School &amp; Beyond! - . 7 th grade presentation presented by mrs.

Welcome to Tilden Middle School for 7 th and 8 th Grade Articulation - . we are here to support you!. irina lagrange,

The History of Ceramic Pottery - . ceramic

Welcome to 8 th Grade at Tilden Middle School! - . we are here to support you!. irina lagrange, principal jim alessi,

Pottery - . spring 2014. what is pottery. functional and decorative artwork such as vases, bowls, pots, and dishes that

Ceramics - . by mrs. breckenridge. ceramic vocabulary. wedging. before you begin to work with your clay you need to wedge

Clay Pottery - . art 1 tcchs 2014. pinch pots. with pinching gestures, you can mold clay into objects such as animals or