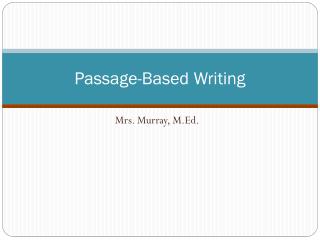 The SAT Critical Reading Section Continued: Passage-Based Questions - . review and moving forward. what are the

Passage #1 - Big question: in this passage, how does the narrator’s point of view help establish the setting of the

Writing a Summary - . to reproduce the main idea of a passage without rewriting most of the piece. read carefully. look

The Leaning Tower of Pisa - . 广州市骏景中学初一英语备课组. read the passage quickly and find out

Rites of Passage - . a rite of passage is a ceremony, ritual, or event that marks a change in life or status. examples.

Lesson 8 - . e-mail. all writing has a beginning, a middle, and an ending. this is true for letters as well as expository

The Write Way! - Learn to write what’s right: a rite of passage for seek writers as they’re writing and citing. you

BARRIERS TO FISH PASSAGE - . barriers to fish passage. a project of the greater adirondack rc&amp;d, us fish and