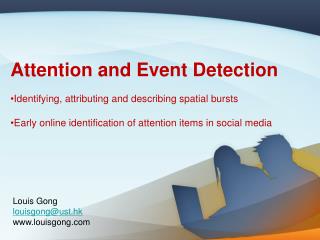 Global Predicate Detection and Event Ordering - . our problem. to compute predicates over the state of a distributed

An Introduction to Action Recognition/Detection - . sami benzaid november 17, 2009. what is action recognition?. the

Event management - . some areas we considered in planning an event. conceptualizing the event marketing &amp;

Spatial Statistics II - . resm 575 spring 2011 lecture 11. what we will use spatial stats to find. how features are

Attention - . focus on what matters. what is attention?. selection needed to avoid “information overload” related to