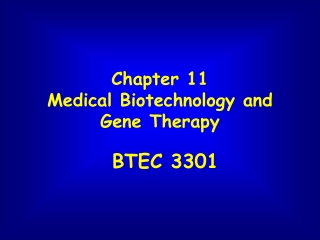 Chapter 11 Medical Biotechnology and Gene Therapy. BTEC 3301. How is biotechnology used in Medicine?. Biotechnology is responsible for hundreds of medical diagnostic tests that detect disease earlier, enduring a more accurate, beneficial and cost-effective outcome to disease. Passion is our driver, strategy is our compass - . may 6, 2016. family introductions. proposed juvenile batten treatment

Biotechnology - . chapter 7. what is biotechnology?. the use of technology to enhance living things cloning genetic

Biotechnology &amp; Genethics - . what can we do with biotechnology?. genetic screening &amp; testing in vitro

19 基因治疗 Gene Therapy - . 1. what is gene therapy?. genes, which are carried on chromosomes, are the basic

Gene Therapy - . what is it?. ~ procedure, in which gene in body organs, or some body tissue is being replaced with

Biotechnology - . according to some…making the products you buy. . .better!. any process that uses our understanding of