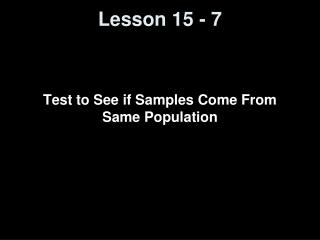 Lesson 15 - 7 - . test to see if samples come from same population. objectives. test a claim using the

LESSON 15 - . overview of previous lesson(s). over view. strategies that have been used to implement and optimize pattern

Lesson 15 - . no signpost in the sea. questions:. what is the general function of a “signposts”? what is the special

Lesson 15 - . quit. the teacher asked the students to quit talking in class . quick. . rick is a quick runner. arm. the

LESSON 15 - . the christian and the means of grace. opening prayer. for christian homes, o lord, we pray, that you might

Lesson 15 - . inheritance, polymorphism, and virtual functions. what is inheritance?. provides a way to create a new