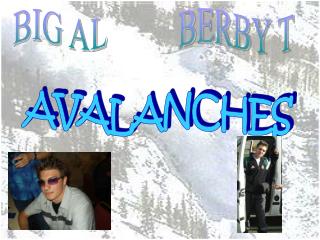 Snow Avalanches - . what is an avalanche?. a falling mass of snow and/or ice a mass-wasting process analogous to debris

Flood - . kokoreva lena abolinsh anna. flood -is a temporary overflow of water, which covers significant areas of the

Chapter 12 - . concepts of emergency and disaster preparedness. disaster. disaster — an event in which illness or

15.1 Energy and Its Forms - . avalanches have a great potential for danger, so scientists research when to cause them in

There are some things we don’t have control over like the objective hazards. - In mountain climbing there are certain

The Land Mover’s Quiz! - . the word avalanch comes from the latin word slide and the french word . a) upwards . c)

Avalanche Safety - . team avalanche. statistics. avalanches are at greatest risk to occur 24 hours after a foot of