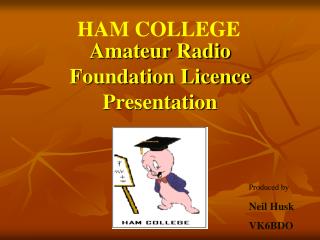 Foundation Licence - . feeders and antennas. what they do. feeder: transfers rf current between a transceiver and antenna

Amateur Radio Briefing - . when all else fails. what is the cemp. comprehensive emergency management plan master plan for

Amateur Radio Satellites - . exciting communications made fun and easy!. how to contact us!. kd0hkd – randy schulze.