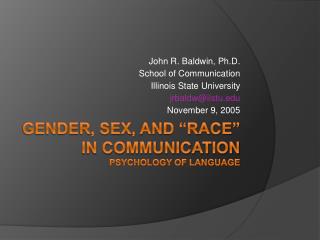 Gender, Sex, and “Race” in Communication Psychology of Language Gender, Sex, and “Race” in Communication Psychology of Language

The Psychology of Race - . is race relevant?. in the past people incorrectly identified five major races: white, yellow,

Race, Gender, and S ocial C lass How are they connected and how has it evolved over time? - . savanna dakhil.

Dialects and Sociolinguistics - . dialect : a subset of language that varies (typically) by region, but also possibly by

Adolescent Psychology - . chapter 5: gender. what is gender?. is there a difference between gender &amp; sex? gender