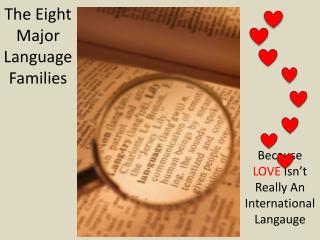 The Eight Major Classes - . of the greek pantheon. they are all immortals. these were the primeval beings who emerged at

Language and Language Families - . world languages-- today there are approximately 6,000 languages spoken around the

Language Families Of The World - . languages. language may refer either to the specifically human capacity for acquiring

SPOKEN LANGUAGE OF THE ARYANS - MAJOR LANGUAGE OF INDIA - . sanskrit. chief of aryan tribes. rajah. tribes of people from

The Great Eight - . phrases and clauses. the great eight. the fabulous four do not always work alone. master writers and

Where Are Other Language Families Distributed? - . classification of languages indo-european = the largest language