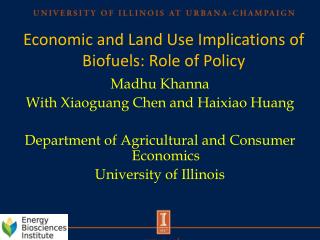 Economic and Land Use Implications of Biofuels: Role of Policy

Economic and Land Use Implications of Biofuels: Role of Policy - PowerPoint PPT Presentation Economic and Land Use Implications of Biofuels: Role of Policy

Introduction to Biofuels and Bioenergy - . why biofuels and bioenergy executive order s-06-06 biofuel/bioenergy

Land Cover and Land Use Change in South Asia Background and Objectives of the Meeting - . chris justice dept of

South Africa’s bioenergy policy and the economics of biofuels: Lessons from the US experience - . patrick westhoff (

Key aspects of EU policy on biofuels - Opportunities on the eu biofuels market: shared benefits for farmers of the eu and

The economic of biofuel and policy-Program in the EBI: What We Have Done and What We Need To Do - . david zilberman,

Challenges for land use and land cover data in integrated global change assessments - . peter verburg. use of land use

The impacts of lignocellulosic biomass-based biofuel production on land use changes in Europe - . by anabelle couleau

Biofuel and the Economics of Refineries - . gal hochman with geoffrey barrow , ella segev , and david zilberman.

Economics of Biofuels - . lecture 17 economics of food markets alan matthews. why governments are interested in

Sustainable Land Use Practices in Biofuels Getting It Right - . about hg consulting. company experience: founded in 2006