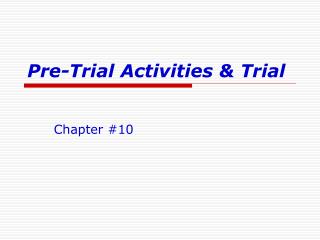 WHERE WE ARE &amp; WHAT WE’RE DOING - . pleading pre-trial discovery resolution without trial trial &amp;

What is a “FAIR TRIAL?” What is an “UNFAIR TRIAL?” - Why is a fair trial to important to our judicial system?

CJP – The Trial - . right to trial by jury. when are juries used? 6 th amendment juries are not required for offenses

Your First Research Grant: The NCI R21 Quick-Trial - How will you fund your trial?. i already have grant support for the