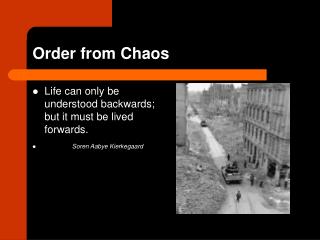 Order from Chaos. Life can only be understood backwards; but it must be lived forwards. Soren Aabye Kierkegaard. Classification Historical Review. The Relationships of Plants. Plants. Order and Chaos - . in this lesson, you will learn how to use the order of operations and some numbers to create an

Order out of Chaos - . the intelligence process must cast a wide net of data in order to support its policy mission data

Creation FROM Chaos: - . creation for fruit:. day 6: land for humans for: being fruitful &amp; multiplying taking

Order From Chaos: The Greek Temple and the Classical Orders - . i. greek prehistory: the bronze age in the aegean sea,

Order from Chaos: Development and Implementation of NMAIs Culture Thesaurus - About nmai. nmai is the 16th museum of the

From Chaos to Creation: - (suggested) outline. who is the creative engineer ?understanding the brain : case of the