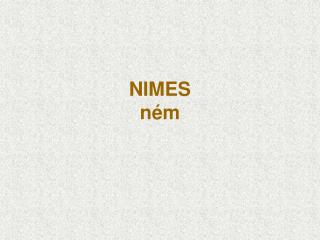 NIMES ném. I wonder if the GAP in France is anything like it is in the US?. Ancient Trade Routes. Nimes lies in the foothills of the Cevennes range of mountains in the southeast of France. (1) By What name is this building popularly known, and what does it mean? [ACH] - . maison carree, square/rectangular