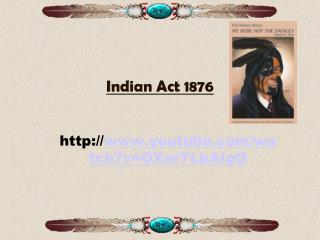 Indian Act 1876. http:// www.youtube.com/watch?v=OXarTLbAIgQ. Definitions. Inalienable Rights: guaranteed entitlements that cannot be transferred from one person to another Franchise: the right to vote

The History Of Aboriginal Peoples In Canada - . vocabulary. #40 aboriginal people : they are the first people to live in

The Indian Act - . first nations 12. learning goal. analyze the impact of the indian act on the first nations. the

THE IMPACT OF THE INDIAN ACT ON COLLECTIVE RIGHTS - Chapter 4: to what extent has canada affirmed collective rights?.

The Imposition and Resistance of Liberalism - . to what extent, and for whom, has the imposition of liberalism been

Imposing Liberalism - . the key to understanding how liberalism has been viewed by different groups in north america is