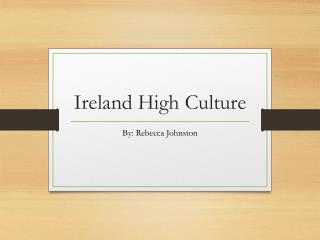 Ireland High Culture. By: R ebecca Johnston. Traditional Irish Music. Mainly dance music. Consisting of melodic lines with many variations. The only true way to learn an I rish tune is to listen to it . Several different versions of the same tune Most tunes consist of two parts

Dancing with the Irish - Behind the scenes at the largest irish dancing competition in the world with over 5,000

Modern Irish History and The Irish in America - . objectives. through the use of videos, powerpoints, and primary sources

IRISH TRADITIONS - . our customs and traditions are one way we express who we are. by this staging project students get

RIVERDANCE - . derckachev nikita. what is it?. riverdance  is a  show consisting of traditional irish stepdancing,

Ireland - . the emerald island. jill nicholson mr. kelly. location. ireland is located in the atlantic ocean on the

Irish Culture - . by aoife and amy glynn . dublin. dublin is ireland’s capital city. this is a map of ireland. this