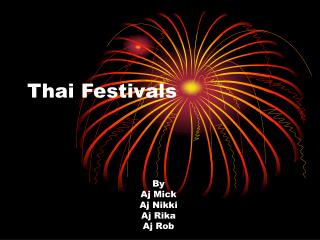 Thai Festivals. By Aj Mick Aj Nikki Aj Rika Aj Rob. Introduction. Thailand is a country steeped in history and culture. This presentation looks at three important festivals in Thailand. As Thailand is a popular foreign tourist and ex-pat destination we pondered;

Festivals Come Alive With The Indian Community In Sydney - During the times of diwali or holi, you will notice that even

Celebrate Festivals with Your Loved Ones by Sending Flowers Online to Hyderabad - Indian festivals are full of happiness.

Ancient Theatres - Festivals - . festivals – there were 2 major ones held in athens – and many minor ones. drama was

Celebrate The Festival Of Light - Diwali is celebrated as the festival of lights in india. do not miss a chance to make

GRERKS THAI - . with over 30 years of experience and service around the world. grerks thai enterprise recruitment co.,