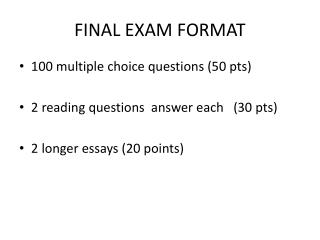 Format Final Exam - . ba 5938 multivariate analysis. the approximate general format. first off you will be allowed 4

Exam Format - . 4 questions you must do all questions there is choice within some of the questions learning outcomes:

Exam Format - Final exam review this powerpoint is a list of what we covered in design i. anything from this coverage may

Final Presentation Format - . background. this a template for the sldp final presentation remember: this is a sales

FINAL REPORT FORMAT - . general guidelines for primary text. all the components in the table of contents will not have

Final Exam - . team presentation. grading. final accounts for 20% of your grade. format. each group should have 2-4

Final Exam - Sarah kempfer. final exam. leadership. the puzzle shows all the things you need for good leadership this