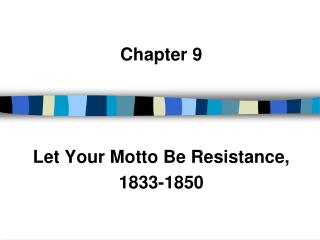 American Evolution 1830-1850 - . a study of reform movements and the growth of the united states. push factors: political

The Territorial Expansion of the United States 1830’s-1850’s - . exploring the west. american expansion was so rapid

Let Your Motto Be Resistance (1833-1850)- Part 2 - . aggressive abolitionism the amistad the underground railroad

Let Your Motto Be Resistance (1833-1850)- Part 2 - . aggressive abolitionism the amistad the underground railroad

Chapter 14 - . managing it: planning and implementing change. chapter objectives . how end user resistance to changes in