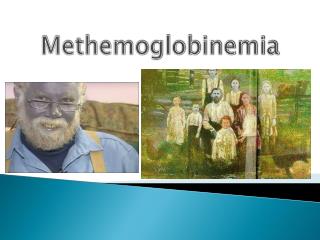 Methemoglobinemia. . Alternative names. erythrocyte reductase deficiency is a name also the family famous for this as known as The Blue Fugates or The Blue People of Kentucky . Inheritance Pattern. Methemoglobinemia - . liza and makena. what is it?. autosomal recessive genetic disorder hereditary/acquirable bluish

Methemoglobinemia Related to Local Anesthetics: A Summary of 242 Episodes - Overview. this article was chosen for

Methemoglobinemia: The real cause of the Blue People of Kentucky - . history. martin fugate, a french orphan, married

Cyanosis - . definition. cyanosis refers to a bluish color of the skin and mucous membranes resulting from an increased

DEFINITION - . hypoxia: a condition in which the oxygen available is inadequate at the tissue level five types of

Meet The Fugates - . “the blue people of kentucky”. where: troublesome creek kentucky who: fugates &amp; smith

No…No…No… Not in Your Mouth!!! - . a toxicology case study. patient history. 14-month-old girl at dinner time, her

SHOCK - . shock defintion. the common denominator in all forms of shock is inadequate capillary perfusion. shock is

Smurfs, Trolls &amp; Elves - . krishna &amp; cyanide poisoning. tuareg. use of indigo dye is so prevalent that is