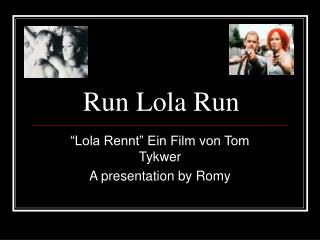 Run Lola Run - . character analysis. papa. deceiving – he is cheating on lola’s mother and is going to divorce her

Run Lola Run: Symbolism - . by: hareet, yashmeet and zach. what is symbolism?. symbolism is the act of representing