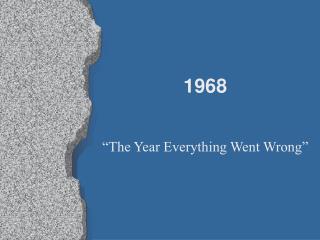 1968 - . how not to cross cultures. what is culture. cumulative deposit of knowledge shared by a relatively large group

1968 - . chapter 29.3. main idea. as the vietnam war dragged on and increasingly appeared to be unwinnable, deep

1968 - . an enemy attack in vietnam, two assassinations, and a chaotic political convention make 1968 an explosive year.

1968 - Bridging eop’s past to the present and future: challenges, opportunities, responsibilities 40 th anniversary

1968 - . the dawning of the “age of aquarius”?. january. the tet offensive. vietnamese new year north vietnamese