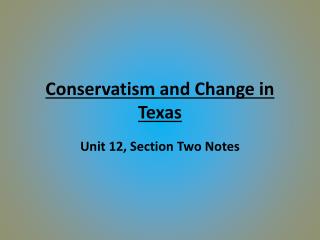 Conservatism and Change in Texas Conservatism and Change in Texas

Resurgence of Conservatism - . chapter 22. social concerns in the 1980s. health, education and cities in crisis. one of

33.3 American Society in a Conservative Age - . objective: to understand the social and economic changes that occurred in

The New Conservatism - . societies change over time. conservatives and liberals disagree on the role of government. many

The Individual and the Megastate - . “i’m from texas.”. rural society where everyone’s a cowboy and rides a horse

The Conservative Counterrevolution in the Era of Reagan and Bush and The Policy Uncertainty of the Clinton - N. text: the