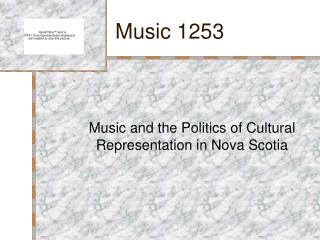 Music 1253. Music and the Politics of Cultural Representation in Nova Scotia. Tourism Marketing. The province of Nova Scotia is routinely marketed through tourism promotions and popular culture advertisements as a sort of living Scottish antique. Erase the Netflix Error M7361-1253 - Netflix is a streaming app that consists of thousands of hours of content. but,