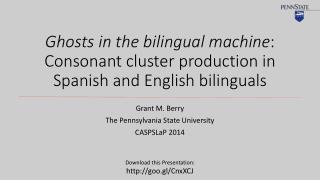 Ghosts in the bilingual machine : Consonant cluster production in Spanish and English bilinguals Ghosts in the bilingual machine : Consonant cluster production in Spanish and English bilinguals

Language Assessment of Bilingual Children - . information about bilinguals in u.s. bilinguals not “two monolinguals in

Terminology Across Borders : A Partnership to Build a Bilingual Tool for the Americas - . lori j. finch, thesaurus

Gothic Ghosts - To be successful…. have a copy of the wuthering heights chapter 3 in front of you. gothic ghosts. we

Ghosts! - . are they real?. can ghosts exsist ?. t.a.p.s is a group of people who hunt ghosts and paranormal activity

Hello Class - . today we will be thinking about the final consonant cluster sp, mp and lp . first we will start to think

Cluster during and after milking - . clean cluster. drop down hoses. good quality liners and tubing. seals and shut off