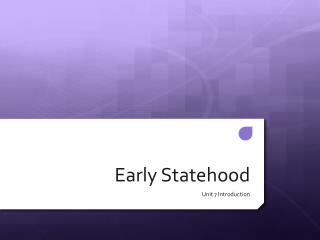 Chapter 3: The Road to Statehood - . titan blaster #4: list at least ten places in mississippi that have native american

Social Studies Unit 2 - . exploration to early statehood. what are we going to learn?. why did europeans come to north

Early History of Florida - . in the very beginning…. according to anthropologists and historians, the first people to

The American Revolution &amp; Statehood - . unit 3. question. how did britain plan to pay off their debt from the

Chapter 2 From Frontier to Statehood - . the ice ages. 1. the first “americans” migrated from asia during the ice

The Annexation of Texas and Early Statehood - . u nit 7 vocabulary. manifest destiny. the belief that the united states

New Mexico’s Bumpy Road to Statehood - . the long and winding road!. road to