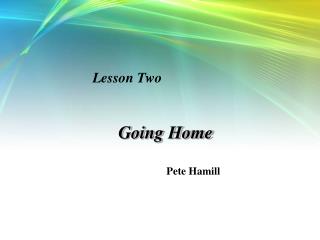 Your Home Directory - . when you login to the server, you always start in your home directory. create sub-directories to

Spring Greening and Cleaning Around the Home - . goals for a green home:. 1. make your home safe, healthy, and

Chapter 14. Home Ownership - . decisions – top of page 2 of textbook, chapter 14. will they pay taxes on gain from sale

How to Make Your Home an Islamic One - . seemab memorial masjid charlieville, trinidad &amp; tobago presented by

4 Easy Changes To Go Green at Home or Office - India can save water conservation solutions from eco365 solution, water