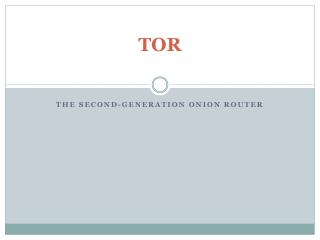 TOR. The Second-Generation Onion Router. About the Paper. This paper is one of few that shape the history because it was the origin of the Alpha version of TOR. Agenda. Overview The mechanism Goals and Assumptions Improvement to be done Attacks in mind and problems. To make life easier.