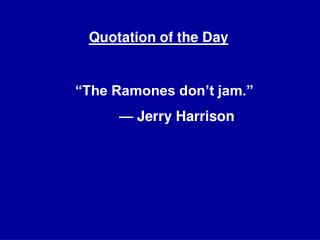 Quotation of the Day

Quotation of the Day. “The Ramones don’t jam.” — Jerry Harrison. About our schedule MARCH 21: NO CLASS MARCH 26: NO CLASS The next time we meet: MARCH 28: QUIZ #4 ON SINGER. CLONING. Cloning!. How babies are made (PG version) Sperm fertilizes ovum.

Quotation of the Day

Top 10 Filmmaking Quotes ever - In the case of filmmaking, there are numerous approaches to translating a story to

Do you like rainy days? - . when you see a puddle, what do you do?. i am going (or went) out of town for spring break.

EMBEDDING QUOTATIONS - . english i preap. what is it?. each piece of quoted material in a paragraph must have an

QUOTATION - . you are going to learn all about using quotation. have pen/pencil ready to take notes. throughout the show

A person’s reputation is a mixture of what his friends, enemies, and relatives say behind his back - Quotes in this

Quotes - . and clichés. the quote. writers for the mass media rely on interviews. these produce quotes. when you refer

Quotes - . the function of leadership is to produce more leaders, not more followers. ralph nadar oh it is excellent to

Quotation “Dos” - Our goal: to learn how to integrate supporting quotes into your essays so that the quotes flow

Quotation, Summary or Paraphrase? - . decide whether to use a quotation, summary or paraphrase. read the advice and/or

“ ICE ” Quotes - . taking notes:. think about the main message. ask yourself, what do i need to know? ask, what do i

Incorporating Quotes &amp; The Art of Explication - . by yours truly. overview.

Paraphrasing the Story and Integrating Quotations - . there are three ways to structure concrete detail in a