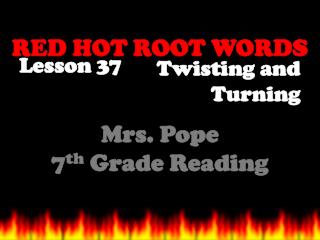 Rugby and Rosie - . rugby and rosie by robin sas. objectives:. you will: recognize base or root words with the suffix

University of Phoenix MTH 209 Algebra II - . week 4 the fun fun fun continues!. a jump to radicals! section 9.1. what is

Dynamic Trees - . goal: maintain a forest of rooted trees with costs on vertices. each tree has a root, every edge

OUR COMMUNICATION : - Words -How we say these words (our tone, pitch, volume, etc.) -Non-verbal communication - . less

Computer Parts, Words and Definitions - . listen carefully to the words you hear. all of these words will be used by the

C.S.I. - C.s.i. c lues in s entences i nvestigation context clues! brought to you by ms. walsh. guessing the meaning of