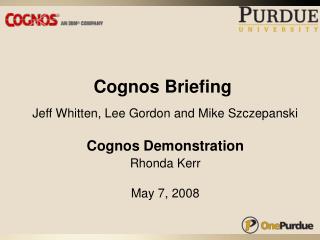 Cognos Report Studio - . prompts and subqueries. creating a prompt. in the query explorer, drag the field that will

Cognos Dashboard Creation - . business intelligence. what is a dashboard?. a dashboard is a collection of information in

Cognos Interview Questions - S for beginners and professionals with a list of top interview questions. visit-

Join Cognos Training to Learn Cognos Analytics Forecasting - If you are using cognos analytics as a beginner, you might