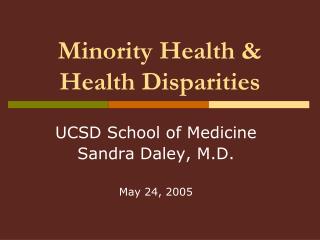 Global Health Disparities - . the universal declaration of human rights. “everyone has the right to a standard of

UNC Minority Health - . sorting out the connections between the built environment and health: a conceptual framework for

Health Disparities - . why we have not solved the problems why we need new approaches bill jenkins, ph.d., m.p.h. the