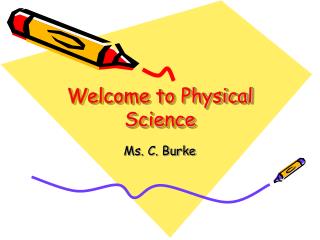 Welcome to Physical Science. Ms. C. Burke. Ch 1-Science skills Science vs. Technology. SCIENCE= system of knowledge & the methods you use to find knowledge TECHNOLOGY= the application of scientific knowledge to improve the quality of life Which came first-science or technology?.

Introduction to Forensic Science - . crime scene investigation. participation question. can you give an example of a type

Physical Science: Ch 6 Notes - A. atoms bond to form compounds. compound- a substance that is composed of two or more