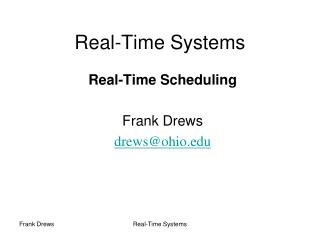 Real-Time Systems. Real-Time Scheduling Frank Drews drews@ohio.edu. Characteristics of a RTS. Large and complex OR small and embedded Vary from a few hundred lines of assembler or C to millions of lines of lines of high-level language code Concurrent control of separate system components

Introduction to Real-Time Systems - . real time system. “a real time computer system is one in which the correctness of [Report] Real-Time Marketing: The Agility to Leverage 'Now' by Rebecca Lieb - Digital channels are 'on' 24/7, a fact