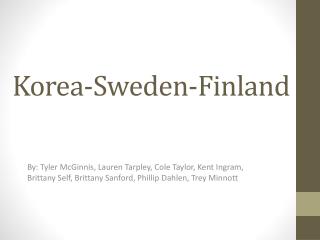 London, Eng - 1) describe what you see in these pictures. 2) can you give a name to what you see?. new york, usa. london,

FINLAND AS A ROLE-MODEL: HUNGARY AND ROMANIA DURING EUROPEAN DÉTENTE - . march 21, 2005 katalin miklóssy university of

Politics of social policy in Korea - . why is inequality becoming a bigger concern? what effects did the democratization

FINLAND TO 6B - . this is finland’s flag. we put it on some sundays and on the day it was officially ours. the

Sauna from Finland - . jyväskylä. jyväskylä. it is the largest city in central finland and on the finnish lakeland.