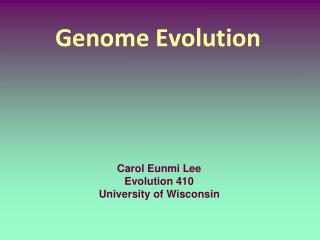 GENOME EVOLUTION - . about 11 to 15 billion years ago all of the matter and energy in the universe was concentrated into

Genome evolution - . lecture 5: species, genomes and trees. what is a species?. multiple definitions.. free flow of

Genome evolution - . there are both proximate and ultimate explanations in molecular biology mutation continually