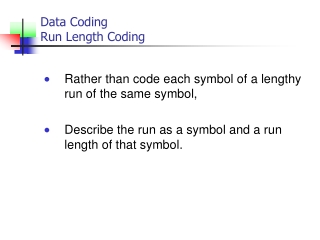 Data Coding Run Length Coding. Rather than code each symbol of a lengthy run of the same symbol, Describe the run as a symbol and a run length of that symbol. Data Coding Entropy. The Medical Record is the Practice of Medicine. - Lawrence L. Weed, MD - Coding overview and the commander's statement.

Data Coding - . what is it??. “coding is the translation of data into labeled categories suitable for computer