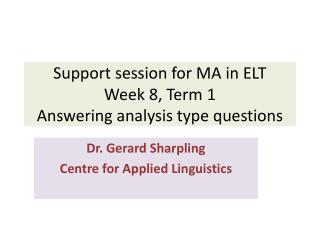 Introduction - . the presentation will address the following questions: what is systems analysis and how does it relate

Close Reading - . aims. to learn the various ways to answer the different types of questions in close reading to become

On Behalf of HUD &amp; FHA Welcome to our session on the Credit Underwriting Borrower Analysis - . housekeeping phone

Chemistry Ch 7 Exam Review - . jeopardy. drill. use electronegativity difference to determine the bond type of the

Asking better questions - . the one thing that will make a session on questioning worthwhile for me personally is….